The Menu plates
In 1961 the guests of the ss Rotterdam were pleasantly surprised at the end of their trip around the world. The menu of the traditional ‘Farewell dinner’ was not made of paper, but written on a ceramic plate, in full color and made by Royal Goedewaagen. This proved such a success that it became a tradition that lasted until 1969. In addition to the menu-plate, a commemorative plate was also published in 1962, on which the Rotterdam is depicted. In the following years only a menu-plate was issued.  People were  disappointed about not provided by a shipplate.  Therefore,  since 1970 no more menu-plates have been issued, but only shipplates. Below are the menu plates.
Menu plate 1961 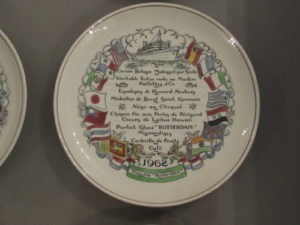 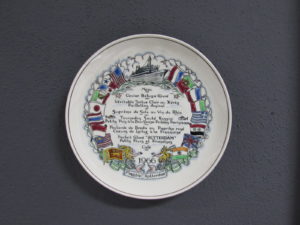 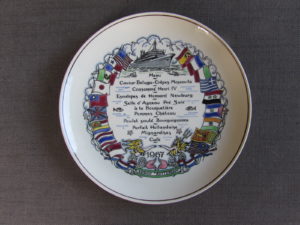 Year: 1967
Maker: Royal Goedewaagen Gouda – Holland
Diameter: 23.2 cm
In collection: Jan Oege Zijlstra
Details: It is a very colorful plate. It contains the flags of 18 countries. Those are the countries that were visited during the world tour of FLAGSHIP “ROTTERDAM” in 1967. At the bottom of the board you see a mermaid and a merman (Neptunes?) In a pose, which may be reminiscent of the famous painting of Michel Angelo, the fresco in the Sistine Chapel, ‘the creation of Adam’. But that may be too far-fetched!
On the back of the board is the text ‘Farewell Dinner on board SS “Rotterdam” Around-the-World Cruise Jan. 24 – Apr. 13, 1967 ‘. In the middle of that text in italic character Holland America Line while ‘Royal Goedewaagen Gouda – Holland’ is written at the bottom. 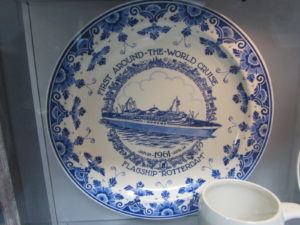 Year: 1961,
Maker:
Diameter:
In collection: Clive Hellinga
Details: This plate was published next to the menu board and with that the year 1961 is one of the few years two plates were handed out on the same ship during one trip. It was therefore the ‘first around the world cruise’ that is written on the board. It ciovers the dates 28 January to 14 April 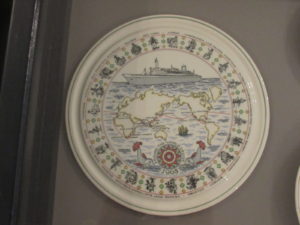 Year: 1968
Maker:
Diameter:
In collection: Clive Hellinga
Specificas: The plate is known as ‘Cheese plate’ and mentions 24 cities, both on the edge and on the map. As far as we know, this is the last menu board issued by the Holland America Line. As said before, this sign contains a reference to 21 cities instead of the flags indicated on the previous menu boards. Year: 1974
Maker:
Diameter:
In collection: Clive Hellinga
Details: ‘Commemorating the maiden world cruise of the ss Veendam 1974’ according to the board. On the board is Holland America Cruises instead of Holland America Line. It is also nice that a kind of Atlas figure, or Neptune, is the world. Possibly a reference to Atlas, which you often encounter on old clocks. But Atlas does not carry the world, but the universe. The edge is decorated with zodiac signs 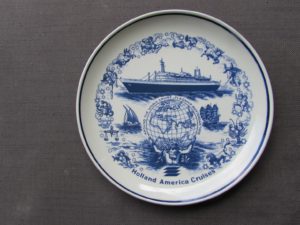 Year: 1975
Maker: Royal Goedewaagen Gouda
Diameter: 23.8 cm
In collection: Jan Oege Zijlstra
Details: This plate is similar to the previous one. Now, however, it is the Rotterdam. There is also a text around the globe, entitled ‘Around the world cruise “Flagship Rotterdam 1975”. In contrast to the simple fish at the Veendam, two tough Chinese junks are depicted here. 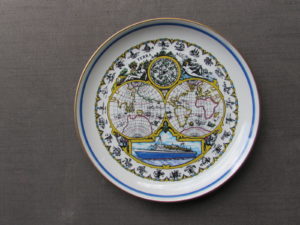 Year: 1978
Maker: The Sheffield China Co.
Diameter: 26.8 cm
In collection: Jan Oege Zijlstra
Details: On the edge of the beautifully colored board are 25 images, representative of the 25 cities that have been visited. There is also the text Terra Aqua (Terra is a Latin girl’s name and means earth , Aqua stands for water ). On the back of the board is: ‘Holland America Cruise, ss Rotterdam, 20th Anniversary World Cruise 1978’. Year: 1979
Maker: Copenhagen Porcelain Bing & Grondahl Purveyor to Her Majesty the Queen of Denmark.
Diameter: 21.6 cm
In collection: Clive Hellinga
Specifics: Four monochrome plates appear in the years 1979 to 1982. Of course the Rotterdam is depicted with the text ‘ss Rotterdam World Cruise 1979’. The places where they are moored are named on the board. 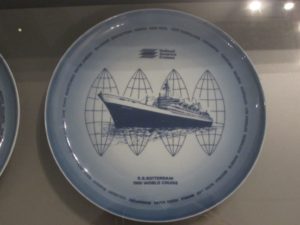 Year: 1980
Maker: Copenhagen Porcelain Bing & Grondahl Purveyor to Her Majesty the Queen of Denmark.
Diameter: 21.6 cm
In collection: Clive Hellinga
Details: A rather sober sign with the text ‘Holland America Cruises’ (plural this time) ‘ss Rotterdam 1980 World Cruise’. On the back of the board is written: “Holland America Cruises proudly presents this award to the top 500 travel agents in recognition of their outstanding sales contribution in 1980”.