March 2019
The vast majority of the plates are made by Royal Goedewaagen on behalf of the Holland America Line. Many of those plates are predominantly blue in color. But Royal Tichelaar in Makkum has also made plates for the HAL. The latter plates are more colorful and also a bit deeper. Until recently I thought that only two plates from Makkum were known, both from 1983. The baptismal sign of the New Amsterdam

and the sign, issued during the Silver Cruise on the Rotterdam, also 1983.

However, recently I found a third plate, made in Makkum. It is a beautiful plate, as the photo below shows. 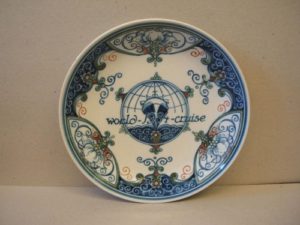 The inscription is ‘World cruise 1984’. It appears that the name of the ship is not mentioned. I have never seen the sign before and have never encountered it before. I found the sign on the site of the Ottema-Kingma Foundation. It can also be read there that the location of the sign is the Ceramic Museum Princessehof with object number BCT 1217. I would also like to have this plate in my collection. And that is the great thing about a hobby, you keep looking!