The Ceramic Museum Goedewaagen in Nieuw Buinen in the Netherlands had during the summer of 2018 an exhibition ‘Cruise ships in clay operated’, containing Dutch ceramics for the NASM / HAL from the collection of Clive Hellinga. A large number of commemorative plates of the Holland America Line were shown there.
As a collector of little ceremic KLM-houses, the plates appealed to me. When one looks around at flea markets and at marktplaats.nl, Ebay, Etsy and Bonanza, tiles and plates in all forms and prices will pass by. It not only formed the start of my collection, I also decided to develop a website with the aim to give an overview of the plates.

May 2019
This month I came in possession of a rare plate. 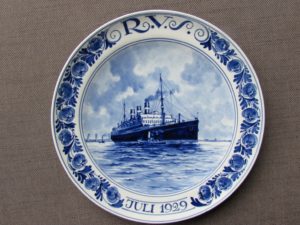 The Statendam III is depicted on the plate. On April 4, 1929, the ship was handed over to the HAL during the official trial run. On board are more than 300 guests, including HRH Prince Hendrik, seven ministers of the first De Geer cabinet and Mayor Patijn of Rotterdam. The first trip took place on April 11, 1929 and led to New York.
The sign is special because it was issued on the occasion of the insurance of the ship by the RVS. RVS Verzekeringen was a Dutch insurance company operating under that name from 1838 to 2011, now part of the Nationale-Nederlanden. During the majority of the 19th century, the RVS was located at Westerstraat 3 in Rotterdam. In the early 90s of the 20th century, the RVS moved into the new building of Nationale Nederlanden (Delftse Poort), in the smaller of the two towers. In 1995, after the merger with Victoria Vesta, the majority of the staff moved to the Victoria Vesta building in Ede, a stone’s throw from my home. The buildings on Westerstraat had to make way for the construction of the Erasmus Bridge.
The back of the platespeaks for itself, just click on it: The plate was made by De Porceleyne Fles in Delft. You can tell by the brand. 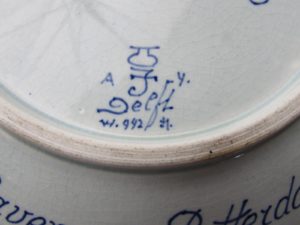 The Porceleyne Fles was founded in 1653 in Delft. Each item is handpainted and has a mark on the bottom – a pharmacy bottle with the initials JT, Joost Thooft, owner of the company in 1876 intertwined. Below the bottle is the word Delft with a curly capital letter D. On the left are the initials of the painter, in this case an A. Unfortunately I could not find the painter’s name. The letter(s) on the right gives the year code. In this case a Y. The sign dates from 1929, for that year the year letters are BY. A Y was probably considered sufficient in this case. At the bottom is the article number.