I have been able to add a menu-plate to my small collection. The plate served as a menu at the Farewell Dinner on the Rotterdam in 1967. If you click on it, you can view the flags of the eighteen countries that were visited during that trip around the world. We tried to trace the countries on the basis of the flags. Clockwise. The first five are Spain, France, Italy, Greece and Syria. Then there will be a flag that we can not figure out. (Who knows which country it is?). Then we continue with India, Sri Lanka and Malaysia. We are about half way and see the flags of Signapore and Thailand. Then again one that we do not know (yet). The last series consists of Great Britain, Taiwan, Japan, Mexico, Panama and finally the United States. 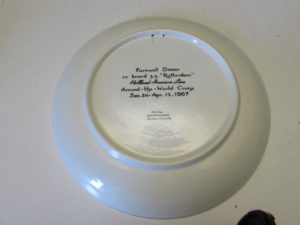 More information about this board can be found on the back. There is written ‘Farewell Dinner on board SS “Rotterdam”  Holland America Line Around-the-world Cruise Jan. 24 – Apr. 13, 1967 Royal Goedewaagen Gouda-Holland’. The plate has been included in the collection under World Tours until 1981.