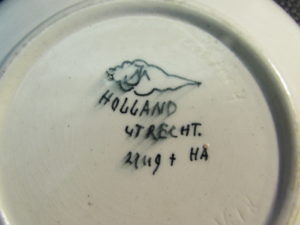 Year: between 1893 and 1906
Maker: Holland Fayence and Tile Factory in Utrecht. The factory existed from 1893 to 1920 with J.W. Mijnlieff as owner. After 1906, only tiles were made, therefor also tablewear. The latter in particular by J. van de Bosch and H.P. Berlage. The production of the factory ended in 1917.
Diameter: 15 cm, the height is 2.5 cm.
In collection: Jan Oege Zijlstra
Details: The figure 27119 probably indicates the pattern of the painting or which colors to use. The + sign is expected to indicate that the dish had to be glazed. The letters HA could mean that the dish was for the Holland America Line. You would think that the abbreviation HAL is more logical than the abbreviation HA, but the maker of the dish probably did not know the abbreviation HAL (yet). Year: early 20th century
Maker: unknown
Diameter:
In collection: Clive Hellinga
Details: The oldest known plate, showing a ship of the Holland America Line, dates from the beginning of the twentieth century and shows the New Amsterdam. The plate is made of milk glass. 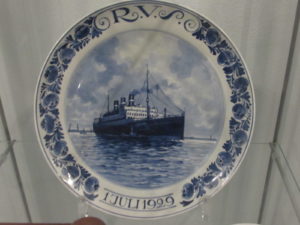 Year: 1929
Maker: De Porceleyne Fles
Diameter: 22,1 cm
In collection: Jan Oege Zijlstra
Details: This plate shows the Statendam III and is launched by the RVS (Rotterdam Insurance Societies). On the back of the plate is the text ‘Statendam Neerlands’ largest steamship in the port of Rotterdam 1929. 300 Million Guilders insured amount’. 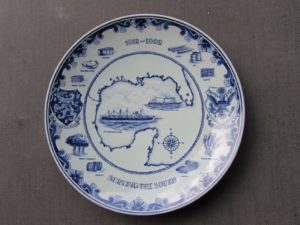 Year: 1962
Creator: Delft Holland with the letters PS
Diameter: 29 cm
In collection: Jan Oege Zijlstra
Specifics: This plate does not apply to cruises, but to cargo. It marks the 50th anniversary of freight transport of the Holland America Line. It shows the SS Sommelsdijk 1912 and the MV Gaasterdijk 1962. The inscriptions are ‘1912-1962’ and ‘Serving the South’. Also two weapons are shown with caption Netherlands and United States of America. As a decoration on the rim, a dozen types of products from ‘bagged goods’ and ‘piece goods’ to ‘steel’ and ‘oil’. In the center the already mentioned ships, a map and a wind rose. Year: 1974
Creator: Royal Goedewaagen, “Blue Delft”
Diameter: 24.3 cm
In collection: Jan Oege Zijlstra
Specifics: In December 1973, Nieuw Amsterdam II made the last cruise. Although there were plans to bring the ship permanently to Rotterdam, it ended up in February 1974 at the wrecker in Kaohsung, Taiwan. The plate contains the text ‘Holland-America Line’ and ‘ss Nieuw-Amsterdam 1938-1974’. It also contains an image of the ship as well as the Dutch and American flag with the letters N.A.S.M in between. (Nederlandsch Amerikaansche Stoomvaart Maatschappij).

(Monarch Star and Monarch Sun (both 1975?) lack the collection) Year: 1982
Creator: Royal Goedewaagen “Blue Delft” Holland
Diameter: 24.3 cm
In collection: Jan Oege Zijlstra
Specifics: The text is ‘ss Statendam IV’ with at the bottom of the 25th anniversary ‘1957-1982’. In the foreground you see the Statue of Liberty while the New York skyline is depicted behind the ship. After many years of service between Amsterdam and New York, the Statendam IV was converted into a cruise ship in 1971. It was sold in 1986. 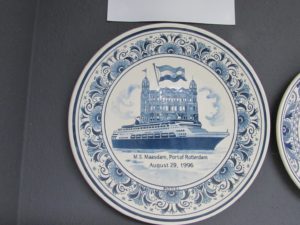 Year: 1996
Creator:
Diameter:
In collection: Clive Hellinga
Additional information: ‘M.S. Maasdam, Port of Rotterdam’ dated ‘August 29, 1996’. The ship is siruared in front of the former headquarters of the Holland America Line, now Hotel New York, also known as ‘The Grand Old Lady’. The building was built in Jugendstile in the period 1901-1917.  You can see the Dutch flag behind the building.
“Rotterdam again cruise port?” is the name of the exhibition that started at the Maritime Museum Prins Hendrik in Rotterdam at the end of June 1996. The reason for this exhibition was the planned visit on Thursday 29 August 1996 of the Maasdam 5. In this way, the city of Rotterdam was attempted to make cruise port again. Year: 1997
Creator: Royal Goedewaagen “Blue Delft” Holland
Diameter: 24.3 cm
In collection: Jan Oege Zijlstra
Details: The plate is very similar to the previous one, however the text is now at the top. On the top is stated “S.S. Rotterdam V”. At the bottom you read the designation “1959-1997”. The building behind the ship shows the name of the company inside the building: ‘Holland America Line’. In contrast to the previous plate, the flag of the NASM (Nederlandsch Amerikaansche Stoomvaart Maatschappij), is proud to be fluttering.
The maiden voyage of the ship was September 3, 1959. It was sold in 1997. On 4 August 2008 the ship was moored permanently in Rotterdam. 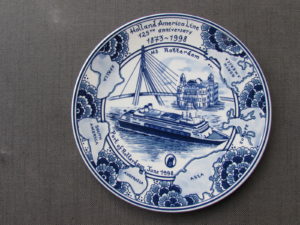 Year: 1998
Creator: Royal Distel dept. or Royal Goedewaagen
Diameter: 24.3 cm.
In collection: Jan Oege Zijlstra
Specifics: ‘Holland America Line 125th anniversary 1873-1998’ and ‘MS Rotterdam’ are at the top of the board. Underneath is stated ‘Port of Rotterdam June 1998’ while in the border the 6 continents of Africa, South America, Australia, Asia, Europe and North America are depicted. In the center we find the ship, the Erasmus Bridge and Hotel New York, the former head office of the Holland America Line. Year: 1999
Creator:
Diameter:
In collection: Clive Hellinga
Details: The Volendam I was in service from 1922-1952. That  ship is shown on the board. At the bottom is ’43rd Z.I.B.V.A.’ which probably represents the 43rd Independent Infantry Brigade Connection Department (in dutch: 43ste Zelfstandige Infanterie Brigade Verbindings Afdeling). The “Volendam” was the first troop transport ship that left for the Dutch East Indies after the start of the “First Police Actions”. Therefor it departed on July 30, 1947 from the Merwehaven.
On the plate you can read the dates September 28, 1949 and September 28, 1999. The board probably recalls troop transport of, among others, the mentioned Z.I.B.V.A. by the Volendam I. 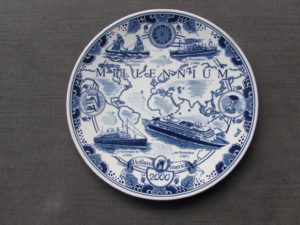