What motivates you to make a cruise like my wife and I did in 2018? That is a piece of family history. The father of my wife, Marijke Rienderhoff is her maiden name, worked in the fifties of the last century with Shell in Venezuela. It was not uncommon at that time that you did a trip to such a country by ship. The proof of this was found in our family archive, a menu of a ‘Private Dinner in remembrance of the pleasant voyage on board MV’ Westerdam, Saturday, March 11th 1950. Captain D. Bregman’. The voyages were from the Netherlands to Venezuela and back were not only in 1950. There are slides from Marijke, about 2 years old, around 1954, on her mother’s arm on a ship. Whether this ship is also the Westerdam is not clear to us. Maybe others recognize the ship. Even when she was about four years old, she was photographed playing on the deck of a (cruise) ship or a cargo ship with passenger accommodation. 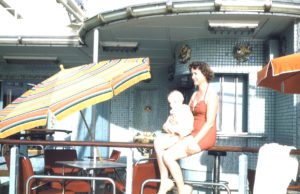 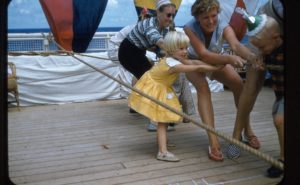 And so it is that we thought ‘let’s take a cruise to feel what that is’. Since then I collect commemorative plates of voyages from the Holland America Line.

In the menu ‘About the ships ‘ references are included as the ships list of the Association De Lijn. If desired, more information about the ships can be found here.

In the menu ‘ Inaugural ‘ references are included to Marine Traffic. More information about the current position of the ships can be found there.

Under the menu ‘ about the ships ‘ 9 plates have been added:
– a set of three ‘Tradition of excellence’ plates;
– also three plates with the ship in front of the New York skyline. The Statue of Liberty is also present;
– the last three plates contain all the SS Rotterdam, but their origin is unknown to me. Five plates have been added under the menu ‘ big trips ‘:
– at the beginning of the menu the Statendam under the Golden Gate bridge;
– four so-called AAA plates at the end of the menu.